Welcome to Edwin Ushiro's preview. Please click on each image to enlarge! All works are stretched over wood bars (giving a cradled panel effect). Please contact us with any questions! 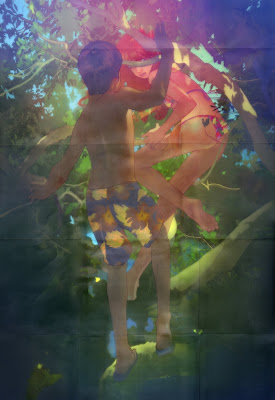 Edwin Ushiro
"All Signals Configuring to a Position Seeping from Words Either Unspoken or Intangible"
mixed media
24" x 35"
Please contact gallery for pricing and availability.
Old timers will tell you that you should never respond to someone who calls out your name
when it is addressed to your back. Also, never answer a stranger when they use
your name to approach it. Hawaiian mythology tells us that these are Calling
Spirits - a disembodied entity that will call out to you, aggressively luring you to step
towards themso they may take your soul.
When cowboys ran the hillside of old Hawaii, a young man on his way home
before dusk heard his name being called. A girl emerged from the foliage. She
expressed a desire to make love to him if he followed her into the woods. The
young man followed. With excitement, he abruptly hesitated after being overwhelmed by an uneasy
feeling. The young man explained to the girl that he changed his mind and decided
to return home. The girl grew angry. She screamed out of frustration. The young
man fled.
Upon returning home, he divulged this strange encounter to his Grandfather. His
Grandfather scolded him, explaining that a Hawaiian does not talk to your back -
it’s not polite - and strangers do not know your name unless they are Calling Spirits.
The next day the young man, accompanied by his Grandfather returned to the site
of this encounter. Following the trail the girl urged him to take, they discovered a
20 ft deep lava pit that was concealed by vines. 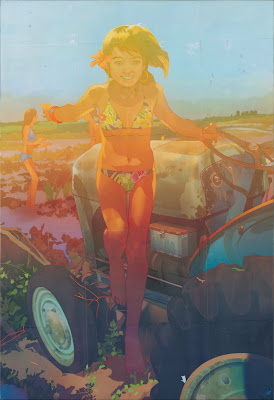 Edwin Ushiro
"Tingling Sensation of Adorable Reminiscentia or Remorse"
mixed media
24" x 35"
Please contact gallery for pricing and availability.
In South Kona, on the island of Hawaii, stood 2 perfectly formed taro plants which
grew side by side. One day the chief ordered his servants to pull the 2 taro plants
in preparation for a feast. Because of their great affection for each other, the 2 taro
plants were determined to move into another part of the taro patch. The chief
caught on and once again ordered them to be pulled. Once again, before anyone
had the chance to touch them, they fled. Leaping into the air, they relocated to the
neighboring district of Kau. Here, they settled under the protection of a kind chief.
They lived together for many years with the name of Kaloekeeke or “The Timid Taro.” 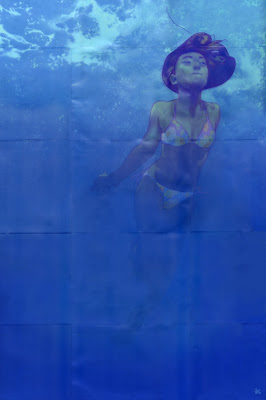 Edwin Ushiro
"To Counter Imponderability"
mixed media
24" x 35"
Please contact gallery for pricing and availability. SOLD
On Oahu, near Waianae, is a place known as Kaena Point. It is legendary for being
used as a jumping off point to the gateway of Po - the eternal dwelling place of the
gods where land, sea and sky merge into one fabric of time and space. Today many people
have witnessed hearing thousands of “inter-dimensional” voices. 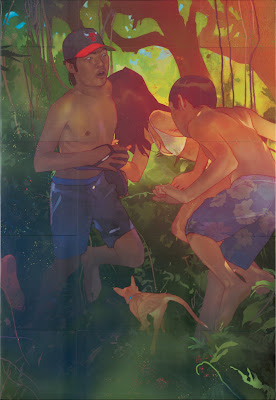 Edwin Ushiro
"Rolling Atop Hills Knowing Full Well that Nothing Exists Beneath You"
mixed media
24" x 35"
Please contact gallery for pricing and availability.
In April of 1957, children at Wahiawa Elementary told school officials that they saw
a strange creature living in the gultch behind the school gymnasium. The school
principal suspected that this was the result of a vivid imagination turned mass hysteria.
Police were summoned to interview the children. They described the creature as a
woman with scaly, greenish skin with seaweed hair, webbed feet similar to a duck and
claw-like hands. This woman was also described as missing a nose and bearing only one
eye.
The Wahiawa Chamber of Commerce organized a search party which combed the
gultch for the creature. No evidence was ever found. 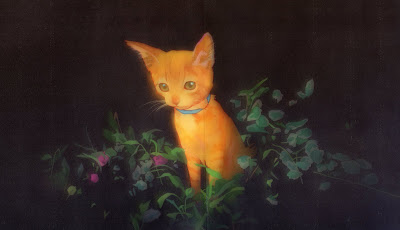 Edwin Ushiro
"A Commemorative Reset Button"
mixed media
6" x 10"
Please contact gallery for pricing and availability. SOLD
Summer gave me the opportunity to discover photography. My Mother’s real estate
clients often left unused products from their vacation behind which I later acquired. Some
of these acquisitions included disposable cameras. I snapped a photo of my cat Rusty when
he was a kitten. Over time this photo was lost. This is a recreation of that photo.

Posted by Kirsten Anderson at 3:22 PM

Beginning his journey as a native from the island of Maui, Edwin Ushiro traveled to California where he attended the Art Center College of Design and graduated with a BFA in Illustration with honors. From there he ventured onto a film career as a Visual Effects Consultant, Storyboard Artist & Concept Designer on projects such as: "CSI Miami," "Battlestar Galactica: Caprica," and "Angel." Continuing an urge to explore his own projects, Edwin has recently expanded onto the gallery scene. His personal art has been viewed at gallery exhibitions in Berlin, Zurich, Korea, Tokyo, New York, Los Angeles, and now Seattle. Edwin has also exhibited in museums including the Japanese American National Museum and Museums of Kyoto.
http://www.mrushiro.com

Edwin Ushiro's work resonates with the echoes of his boyhood in the "slow town" of Wailuku on the Hawaiian island of Maui. In his paintings, he recalls the sun-struck days of youth, when the world was fresh and magical, but also explores the eerie folklore indigenous to dark country roads and the boundless depths of the childhood imagination. While exploring the narrative tradition of "talk story" native to the islands, he interweaves the uncanny obake tales of his Japanese heritage. Working in assemblages of semi-transparent mixed media impressed behind clear vinyl, he melds his expressive drawing skills with both digital and organic painting techniques. The result is luminous and nostalgic, like a cherished memory burnished and worn fragile by the passage of time. - Amanda Erlandson